Well, today was a bit of a mixed bag.  We started out in Chamonix and were really hoping to be able to ride the tram up to view Mont Blanc but while the tram was running, it was so cloudy that we worried we would not be able to see anything.  We asked the women at the  ticket office and she said “Oh, you can’t see anything up there”.  Um, we appreciated the honesty (she obviously did not get paid on commission), and we left disappointed that we did not get to have that experience.  We thought it looked like it would clear if we waited a few hours but felt we had too much on our schedule so we bagged it.  That was our first mistake. 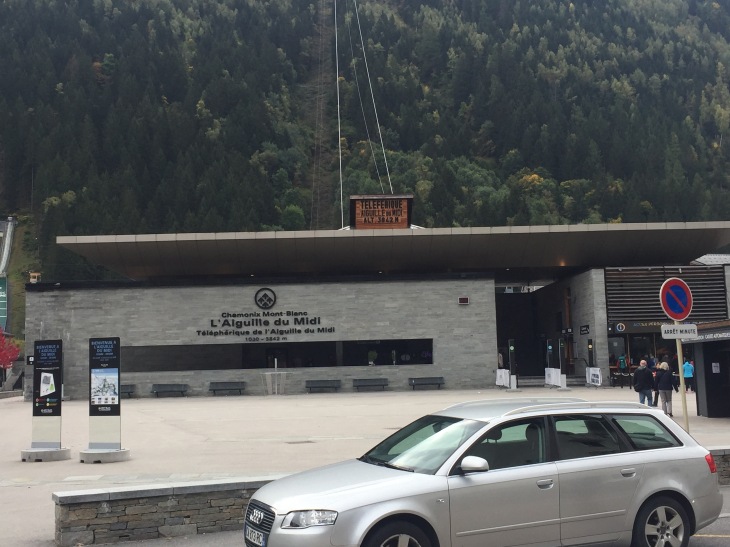 This is the base of the tram up to view Mont Blanc.

We left Chamonix for the drive to Annecy.  I wanted to get some pictures of the Alps but they were very difficult to photograph. Why? In Chamonix, they were pretty covered with clouds and then on the way down, there is just no place to stop for a picture so I had to shoot from the passenger seat. 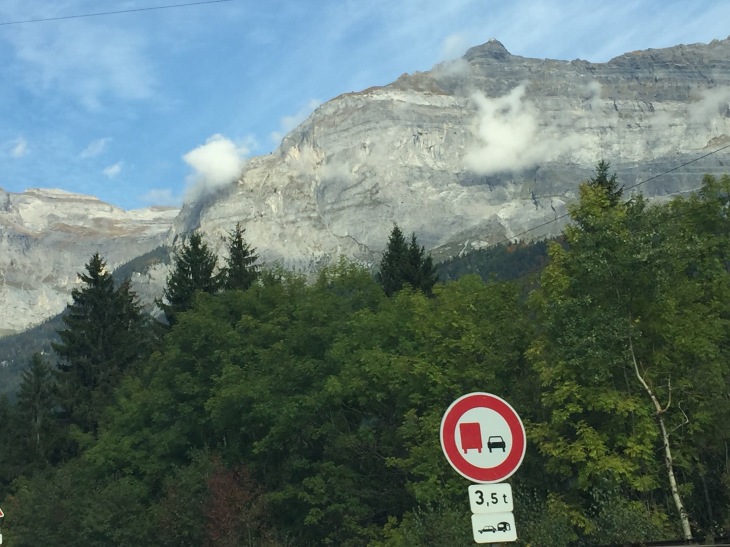 Here are a few attempts.  This one shows the two lanes of traffic into Chamonix that are on a bridge by themselves.  The traffic out of the area is against the mountain and that is the rail that you see in the foreground. 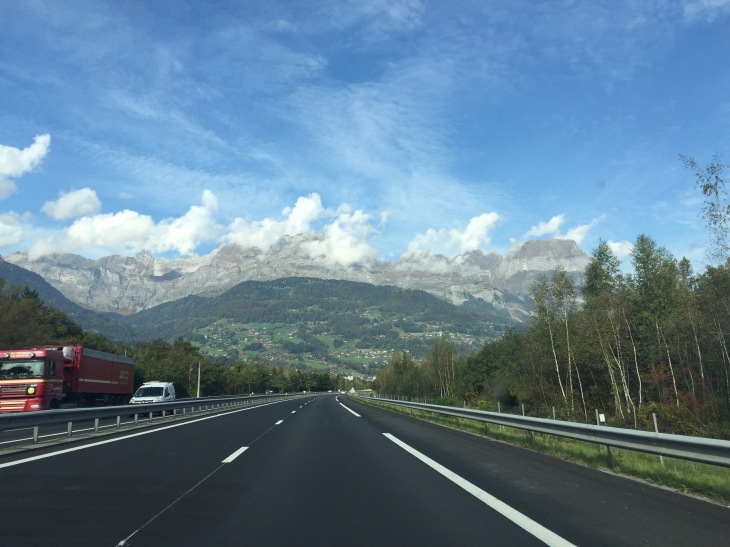 This one shows a pretty good view of them.

The decision to see Annecy turned out to be the best decision we made all day. What a perfect little place on a beautiful lake with what is called the “Pre-Alps” in the background.

The city has a population of a little over 50,000 and it has an amazing old town area on canals from the river that feeds the lake. 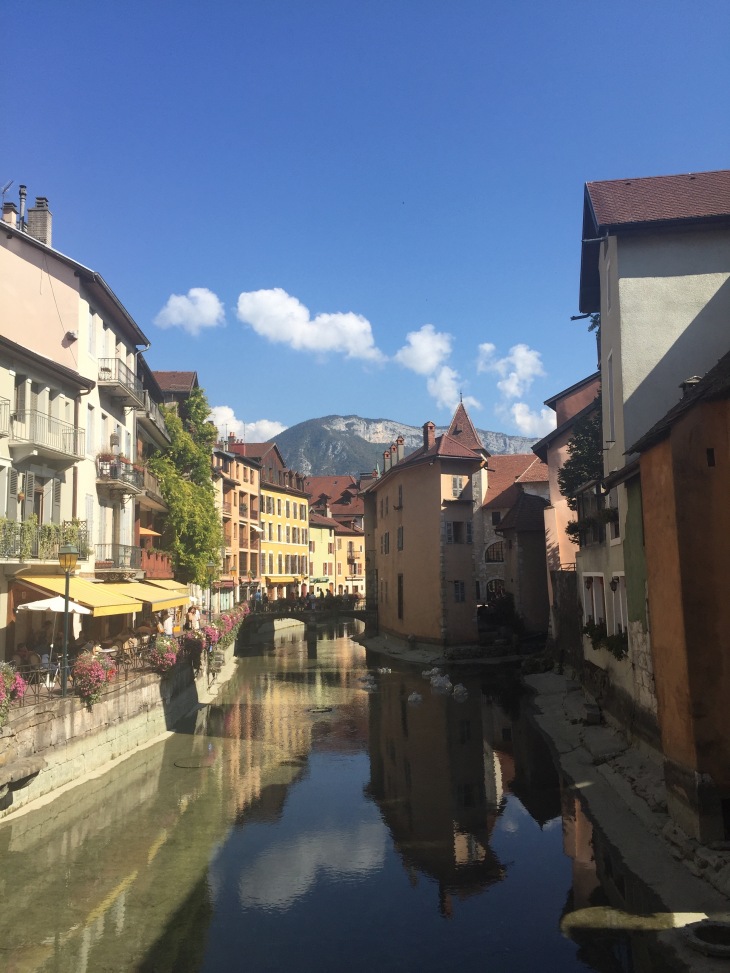 Here is some history of the town that was interesting and shows how old it is.

The buildings in the old town area had that feel of age. Many covered stone passageways went between the streets as well.  There were also many stone steps going between levels of buildings. It reminded me of some of the towns I have seen on the Amalfi coast. The stores contained good quality items, many were small clothing boutiques and leather goods.

Here is a picture of a candy store that made me think of my grandkids and how much they would enjoy this place!

It was getting to be close to 3 by this time so we made the decision to leave for Lyon.

Why a mistake?  Because we could have stayed in Chamonix, seen Mont Blanc, gone to Annecy and had time to go for a boat ride on the lake as well as see the beautiful town and just stayed there for the night and scrapped Lyon.  We failed to process the fact that we were heading off to the third largest city in France aiming to arrive on a weekday at rush hour, the very fine museum we wanted to see there would be closed, the legendary fountain of charging horses at city center was closed for renovation and there was not a single unbooked room we could find for less than $400 per night in the city center……. 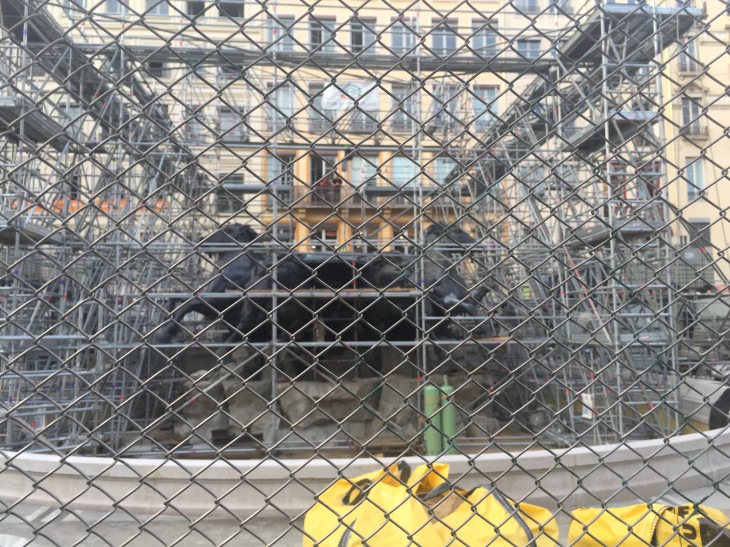 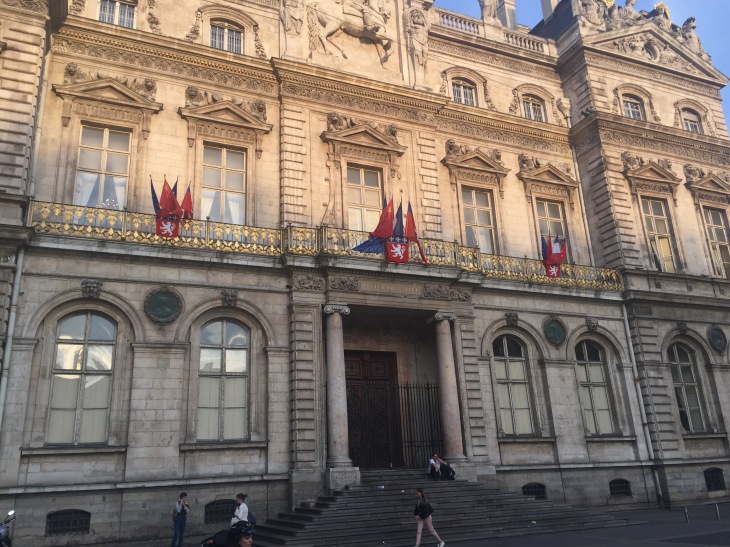 The traffic was atrocious, we were lucky and found an underground parking garage in the city center after asking some friendly denizens on the sidewalk and so we parked and went to an outside cafe on the plaza and had a drink.  We did notice that while huge numbers of people were out at the cafes, absolutely no one had a thing to eat and they were all just drinking.  It was about 6:30 at this point so that is clearly not dinner time yet for the French, but even in Paris we  would see some people having food with their alcohol. Not so in Lyon.

Having realized that we were going to have to leave Lyon to find a reasonably priced room for the night, we wanted to have some dinner before we left so we walked around and looked for a restaurant.  We saw burger joint after burger joint or very expensive places that were completely empty, it not being 9pm yet.

We came upon a place called simply “Paul” that we ran across in Paris several times and had since realized is sort of a French Starbucks, not just coffee though, drinks and fresh bread and sandwiches and every manner of French pastry. You don’t get a snippy look there if you want to eat at the ungodly hour of 7pm or so, so that is what we did, happily sharing a tuna sandwich and some pastry for our dinner in Lyon.

I don’t want to leave anyone with the impression that Lyon is not a great city.  It is. I think it deserved more than our crazy thought of doing it any justice at all in just a few hours.

The lesson today is to remember that we don’t have to be anywhere until the day our car is due to be turned in and we would have saved ourselves a lot of aggravation and stress by simply staying where we were enjoying life and just it enjoying it more there.  Sounds simple, doesn’t it?