Today was a rare day for us lately in that we actually stayed in one city for a whole day and tonight will be a second night here.  We started the day by driving to the train station where we be leaving for Italy tomorrow  morning in order to return our rental car.  It actually turned out to be fortuitous that the rental business was located there because we used the opportunity to purchase our train tickets for tomorrow and to figure out the tram we take to return in the morning since we rode it back to our hotel after the car was gone.

The return process was not the smoothest.  The GPS was pretty confused getting us through the maze of small streets in Nice and we thought the business was in the area of the train station and not in the station itself.  Of course, our phones were worthless in trying to call the business to get further info. on their whereabouts.  After driving in circles around the station for awhile, we saw a sign indicating with an arrow where we were to return the car.  The problem was, the only way in to that space was to go the wrong way against another one way arrow.  With traffic pressuring us and the beeps starting up, we just gulped and went for it. We spiraled up a parking garage type ramp for six floors that was so tight our car barely fit and when we popped out the top, we slid it into the only spot vacant and breathed a sigh of relief.  That was until the attendant reminded us that we were supposed to bring the car back full of gas……. I looked at Jack with a face that said “There is no way I’m going back in that car right now!” and thankfully he said, “Just fill it and I’ll pay the extra cost” Whew! We were happy to be done with that task.

After returning to our hotel and dropping off some items that had been in the car, we just took off to walk and enjoy the beautiful city of Nice.  The city is set right on the Mediterranean and they have done such a great job of putting a pedestrian and bike path all along the water frontage that extends for 7 kilometers.

Jack on the promenade.

We walked to the port area and then into the old city which was full of beautiful old buildings, an interesting mixture of French and Italian styles. Nice itself has such a great blending of these two cultures.  It feels very Italian in many ways to me, but has the added bonus of a different language that I can actually communicate in. We walked into the area of the old city with small streets full of shops and restaurants and we found one that was on the street full of people sitting at picnic style benches who were French and seemed local. Jack is a sardine fan and I saw they had them on the menu (these are the larger fresh kind, not the tinned ones) so we lined up to order.

We got Jack the beignets de sardines and I got the Salad Nicoise. (he ate half the salad 🙂 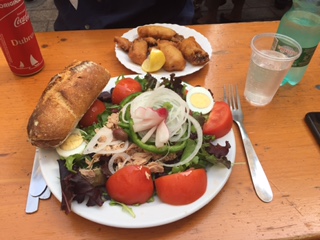 The sardines were deep fried in a beignet type batter.  The salad was a pretty typical Nicoise but with Green Peppers instead of green beans.  This salad is named after this area as denizens of Nice are known as “Nicoise”. 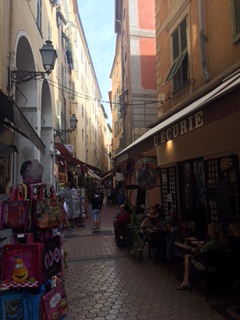 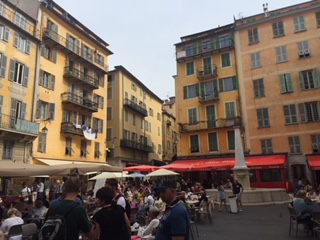 After lunch, we walked some more and ran across a church I had wanted to see that is the oldest in Nice, dating back to the mid-1600’s.  It was spectacular.

There is just something about there feel of a place that has contained so much spiritual energy for all those years, whether you are a believer or not, sitting for a bit in a place like that can be very pleasant.

We checked out some great public spaces, fountains and walkways. 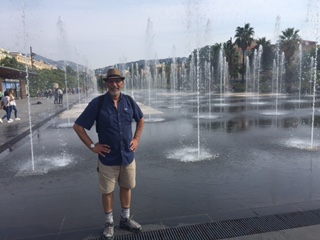 After a bit of a rest at our hotel, we went out to a nice dinner and on the way home I just had to take this shot.

If you read the sign, it says “Private Detective”.  I just thought that doorway and the stairs looked perfect for an entrance to a French Private Detective’s Office, don’t you?