Today we woke up in Lawrence, Kansas to a world encased in ice.  You literally could strap on ice skates and use those to travel the sidewalks and streets.  The cars were covered with it, all the foliage on the trees, bushes and grass as well.  It was in the 20’s and just brutally cold due to the high level of moisture in the air.

We left the motel and thought we’d go look at downtown historic Lawrence and we found a cute downtown with a mixture of national stores you’d expect in a college town, Gap etc.  There did not seem to be many places that were local but we did find a little espresso cafe and had a good cup of coffee.  We decided against the local art museum thinking it might underwhelm us after reading some reviews to that effect as well as having recently been to some really great museums on our European trip. So we headed out with the intention of going to St. Louis.

After getting back on I-70 for an hour or so, we had passed through Kansas City and into Missouri and it was feeling like we were just seeing the interstate and not getting a sense of place.  Cue the billboard for “Fantastic Cave”!  Located near Springfield at the southern end of Missouri, I remembered seeing it in my pre-trip searches for things to do in the state. It is a cave that is explored for tourists with a jeep tour and seemed just the thing to do to lure us off the interstate and into the heart of the state.

Our drive south took us into the large of very large flags.

We drove through some great Ozark canyons, stopped at an Amish store and bought local honey and blueberry jam and saw many lakes and ponds.  The weather continued in the 20’s but luckily as we drove South the ice was less of an issue and the roads were dry although the day continued grey. 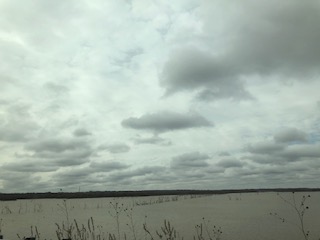 Here is one of many bodies of water we passed.

Once we got to “Fantastic Cave” at about 2pm, we had the luck of being just 20 minutes from the next tour time and they told us that Gizmo was welcome to ride along on the tour!  Only one dog is allowed on each tour so we knew he would be solo (this is necessary since he loves other dogs only when he is not leashed).  We were happy to not have to leave him in a cold car during the trip and he was a perfect little guy on the trip, not a peep out of him!  It seemed right that he was allowed to come since the cave was discovered back in the 1800’s by a dog who was on a walk with his owner.

This is what the road inside the cave looks like.

After the cave was discovered, it was left unexplored until a local group of women who were in an outdoor enthusiast group went in and explored it by candle light.  They wrote their names in the cave and they are shown above.

The formations in the cave are really amazing.  The age of these can be estimated by the fact that in 70 years, the new formations have grown just 3/4 of an inch!  These are about 6 feet high.

After the tour, we looked at the map and realized that we were just an hour or so away from Branson, a place I have always had some interest in.  It had always seemed like a  country themed second-rate Vegas in the depth of the Ozarks , a sort of God and Country Disneyland.  I had to go!

We stopped at the visitor center to see if we could find a dog friendly motel and maybe tickets to a show. We scored both, a $59 room at a Quality Inn and two tickets to the Country Jamboree variety show.

The show was a combo of a quartet shown above, a band with six instruments, a female vocalist and a comic and mc. All the music was live and not recorded. The crowd was pretty sparse due to the off-season timing and the fact that they almost had to cancel due to weather (ice storm worries).  Both Jack and I really enjoyed the show, we were entertained for an hour and a half.  The talent was surprisingly good, much of it homegrown from Branson itself (population only 10,000) or from surrounding Ozark areas. The musicianship was first rate as well.

Today was a successful day off the interstate, looking forward to moving on to Kentucky tomorrow morning.