We started out a little late after sleeping in a bit and headed out for the back roads to Lynchburg to see the Jack Daniels distillery.  Lynchburg is a tiny town in far southern Tennessee and Jack Daniels is the likely the only reason most folks go down there.

On the way we stopped in a little town called Eagleville and explored an antique shop packed with really interesting stuff.  It was located in an old house and the many rooms on the main floor as well as the upstairs were full of items, some just  junky and others really nice examples of original items like wooden butter churns, old signage, stacks of Look and Life magazines in plastic dating back to the 1930’s as well as antique toys, music albums, jewelry, etc.  They had it all.  The owner was a very nice guy who had another job during the week and just had the store open on weekends.  The problem with stores like this is that unless you are a collector of specific items, there is not a real use for these things and once you purchase them, they just become more “stuff”.  We spent a long time poking around and he was so nice that I did purchase a very small inexpensive item since I felt I needed to reward his hospitality by actually relieving him of one of his items.

We walked next door to a small cafe and looked for something “Southern” to eat. 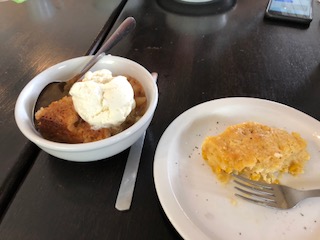 I ordered corn casserole and apple cobbler.  I had never had corn casserole before and it was delicious!  Sort of like a loose warm cornbread full of actual corn. Very tasty.  The cobbler was good but nothing special.

Off we went to Lynchburg. 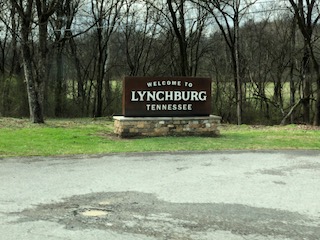 This is the main square. There are little shops surrounding it with various items, many related to Jack Daniels.  They have a store here with old barrels that have been used for their whiskey repurposed into items such as furniture, clocks and other various things for the home.

There was a wine shop and I found some wine in there which had actually been made with grapes grown in the area (most of the wine was made with grapes imported from elsewhere) so I bought a bottle of the red.  It was a varietal that I had not heard of so I am interested in trying it.

We got lucky with arriving without a reservation for a tour but got the last two tickets for a tour leaving just 10 minutes after we arrived.  They bus everyone to the top of their property and you spend the next hour and a half walking downhill through their various building and grounds and hearing about how their whisky is made.

We learned that the difference between bourbon and Tennessee whisky is that whisky is subjected to an additional process in which it is filtered slowly through charcoal which is produce by them on their grounds. They say that removes impurities and mellows the flavor. At the end of the tour we tasted 5 different Jack Daniels whiskeys and then we went to the store there and bought a lot for gifts and a nice bottle for ourselves.

We left Tennessee and drove south into Georgia and met Jack’s friends Tina and Chuck for dinner in Roswell with plans to stay at their home for the night in Milton, about a half hour from Atlanta.

We drove through some very pretty country leaving Tennessee.

Jack Daniels is the guy in the white hat with the dark vest in the middle right.  He is actually standing up in this photo.  He was only a little over 5 feet tall.  His feet were only size 4! 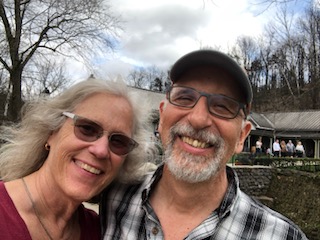 The south does not do a thing for my hair!

One thought on “Tennessee to Georgia”