It was pouring rain when we woke up outside of Mobile, Alabama this morning and the forecast was for rain until 11am.  We headed down highway 10 along the coast towards Boloxi.  I had previously noticed in my Florida trips that I would see a restaurant named “Waffle House” about every few blocks.  On this trip through the South, I realized that it was not only a Florida phenomenon.  As we passed one every mile or so throughout  Alabama and noticed every one had many people eating there, and we were getting hungry, it seemed the time to see what was going on.

We dodged the raindrops and took the culinary plunge.

Inside was a utilitarian type of diner, clean and plastic with several people at the counter and almost all booths full.  We chose a small table that was open and settled down to look at the menu.  It was unremarkable in it’s offerings of pretty standard breakfast fare with some southern touches such as grits and biscuits.

I ordered the pecan waffle since that was the claim to fame in the name. 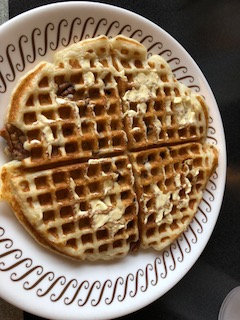 It arrived looking a bit anaemic, on the thin side with  some buttery substance .

The accompanying syrup was not the real maple variety.

Taste was bland and inoffensive but far from anything that would entice me back for another go.

Jack tried an egg, hash brown, toast and grits plate.  The white grits were surprisingly good, creamy and warm, a large portion in a bowl by themselves. His “sunny side up” eggs were startlingly raw. 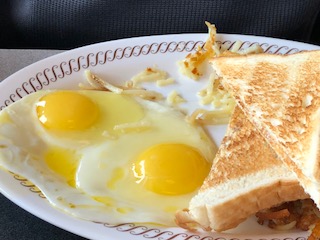 You can see the egg membrane still uncooked…. As I pondered whether Jack would send them back or just ignore them, he shoveled the hash browns on top and ate them!  I was horrified, imagining an afternoon of nausea from eating raw eggs. Unbelievably, he kept them down although he told me late that his stomach was a bit upset afterwards.

So why the crowds? Well, the food was cheap and that is all I could find to recommend it, other than the grits.  I was glad to have finally tried it but am satisfied with my single experience and feel no need to repeat it.

We drove on to Boloxi, where Jack had been stationed in the Air Force over 40 years ago.

Here he is in front of the base.  We didn’t try to get in to look around because we could see from outside that much of the base had been rebuilt and added onto likely since Hurricane Katrina so Jack thought he would not recognize much there. We were able to find his off base married Seaman’s housing. 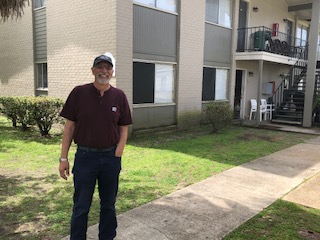 The bottom unit is where he and his first wife lived. I think he was surprised to have found it and it was fun to see the area again for him after so many years.

On we went to New Orleans. Neither Jack or I had been here before, even though he lived so nearby in Biloxi previously. We got there in the early afternoon and walked around the French Quarter.  Very picturesque buildings but the businesses in this area are very touristy and full of the same items again and again.  All things cajun and hot sauce related are quite popular, nothing we felt inclined to buy.

We did, however, feel the need to have an afternoon snack of coffee and beignets.

At the end of the afternoon, we walked by a table with a man named Priest Nagesh doing tarot and palm readings and Jack had it done. 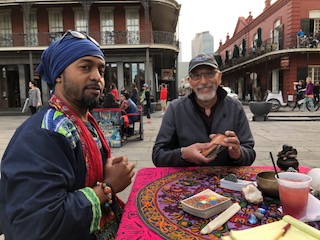 The reading was interesting and he gave Jack a recipe for a “cleanse” that he recommended which is basically a bath with several added ingredients to the water.  Jack will try it, why not?

We are meeting our friend in the morning for breakfast and then will do some more exploring in NOLA!